How lovely it is to be a spectator at a tournament !

My 1st experience at being a spectator was in the World juniors 2014 at Pune, where I was one of the official commentators..I remember I felt so relaxed and tensed at the same time, similar to how we feel in a tournament, but not in the same degree..no, nowhere close! It was a very enjoyable experience to simply go and watch the games live , without having the burden of the result on my head. Or shoulders. My main job was to comment on the games, but when I was not doing that, I would spend time observing the players, their body language, mannerisms, tournament habits..Evenings after the game were relaxed , and involved talking to other players or simply hanging out with my friends. Dinners were free from unwanted friends like mr. regret who follows a loss or ms. anticipation who comes with the next day's pairing. It made for a good change and gave me a different perspective towards my own attitude during a tournament.


Sometimes I would try and guess how the players were feeling about their position by their reactions ..it made me realise my opponents must be doing the same during a game !

This is one of my favourite playing pictures, and the reason why I like it more than the others is because I seem so confident and in control ! 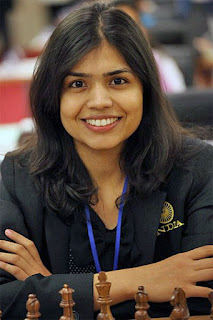 How important it is to look confident, to not give away our real feelings !

Have you noticed, our calculations, evaluations are much quicker when we have to take a decision in somebody else's game ! When there is no clock ticking beside the board or no tournament standings or rating calculations to consider. For me, my involvement is much higher when I am present at the venue & watching the game live, rather than watching a game live online. One of the reasons could be that, at home if I am not sure about a certain move, I tend to check it immediately with the engine provided by the website or the followchess app, rather than forcing myself to calculate (This is actually a very bad habit, the right way to check would be to 1st apply your mind and then check with the engine if necessary ) Also, its just much easier for me to recollect Dominguez - Shirov from Corus 2010 or Nakamura - Sasi from Olympiad 2012, than any game I have studied at home, because I was present at the venue and watched them make the moves on the board at the time.The other day I was solving some positions from Jacob Aagard's exceptional book on calculation, titled... "Calculation"  (duh!) & came across this position

But the best part of visiting and watching live games at a tournament is it makes me feel like I am a part of the tournament. It can be a very inspiring experience you know ! You should try it ! 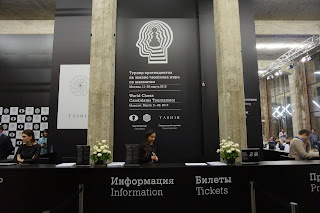 The venue for the Candidates 2016


"Anand drew. Good play by black. Starting from Bd7-Bc6 to h4,Rfe8,a5 ! Controlling b4. Very strong. Anand's Bf3 I dint like very much and if he has gone Bf3 why not follow it up with Bg4 ?! dint understand."

"Everybody is very well dressed today. Two of them were also very well prepared and quickly made an eventful draw and got up."

Lets move on, shall we !

The plan I suggested is very dangerous for white as well, there are many knight jumps. While we were thinking of a good way to proceed, Karjakin totally surprised us by going for a positional continuation, and playing against the weakened squares thanks to f5. He played 1. Bb5 in this position, followed by Nd5-ed, d4!, dc - bc & shortcastled.


Once we saw this position on the board, it was clear how strong his plan ( and understanding ) is.

"Karjakin has a lot of clarity. He goes for specific positions and does not hesitate"

One of the absolute highlights of my stay was a chance meeting with the legendary Mark Dvoretsky !!

"Spoke to Dvoretsky ! Analysed Svidler - Aronian with him. Told him  I loved his books." 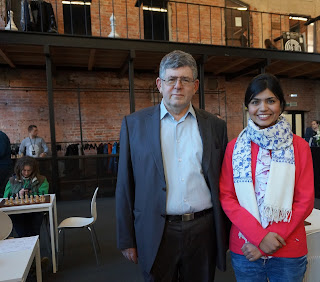 Thank you Mark, for being my teacher.

When I heard the news of his passing away, I felt a number of things at the same time..
Sadness that such a great legend had passed away..
A sense of gratitude to have got the chance to meet him in Moscow and even talk to him and tell him how grateful I was for his teachings !
I never knew him personally, but from what I have read and observed, I feel he taught chess until the very last days of his life and it makes me feel very happy for him. I think any person passionate about his work would want to spend his last days the same way.
But above all I felt gratitude.. to have been lucky enough to have read his books and learn from them. In my initial years, I dint use a computer for a very long time, and a large part of whatever I knew about chess was thanks to his books. Even today I always carry one Dvoretsky book with me for every tournament, and the thing about a good book is , every time you read it you learn something new. Thank you Mark, for being my teacher.

Hanging around at the Candidates venue : 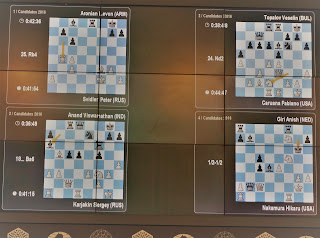 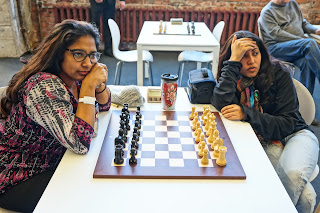 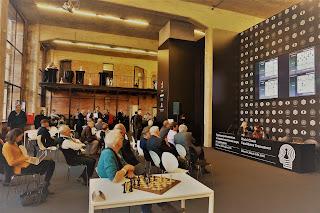 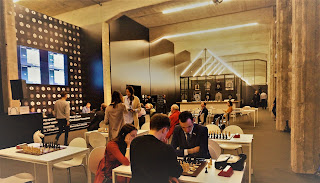 Thats all about the chess stuff..Now lets talk about Moscow !

We managed to take some time out to go around Moscow as well..Its a beautiful city and luckily for us, the weather more or less cooperated with our plans. We visited the Kremlin palace, and went for a tour of the Armory chamber and Cathedral Square. The Kremlin is majestic and left us spellbound . For eg, The armory chamber has a museum which displays Russian treasury, such as Gold, silver & copper ware & jewellery from the 1700s , thrones used by the Tzars, horses's decorated saddles, dinner & cuttlery sets received as gifts by the Tzars by various kings & monarchs all over the world ( it was a custom to bring an appropriate gift for the Tzar while meeting him ; among other things, there was 120 piece dessert set gifted to the Tzar by Nepolian ) , gowns worn by the King & Queen for their coronation ceremony..it was a real treat. It took us 3 hours to go through it fully and at the end we were like kash moghals aur britishers India nahi aate, to hamare museums me bhi ye sab dekhne milta.  Moscow has an old world charm that has been expressed & preserved so well through its architecture. While walking down the streets in Tverskaya street, our eyes would be hooked on to the buildings around us. Even a bank office would be in this rich heritage building. For me , one of the highlights of my sightseeing was travelling in the Underground metro. It is more than 80 years old. built in the 1930s by the Soviet Union. Its many feet under the ground, so that the public transport system would be safe from any bombings. Going down so many feet in the escalator was an event in itself for a person like me who is not comfortable with heights. I was a bit afraid but also thoroughly enjoyed it ! Some pictures from our trip  : 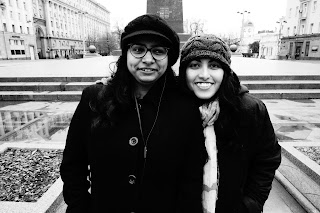 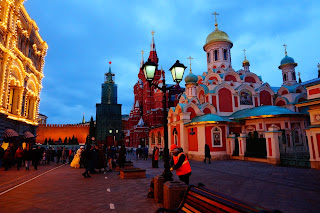 Moscow architecture is dominated with red bricks, with elements of gold & blue, the colours look beautiful at dusk. 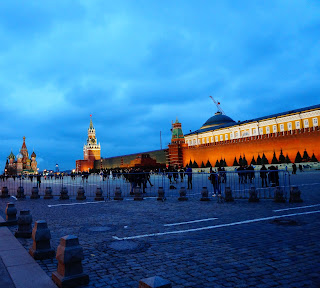 Kremlin at night, with the disneyland- like church at the background. 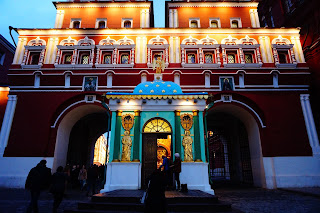 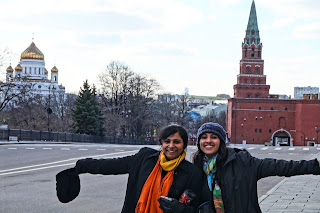 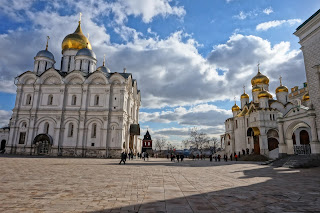 Cathedral Square, where Ivan the Terrible and his family is buried. 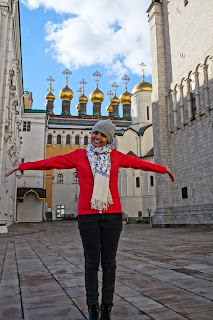 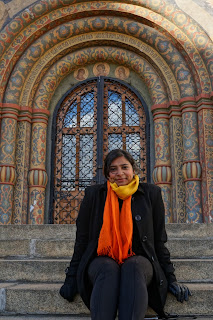 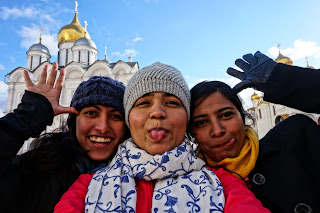 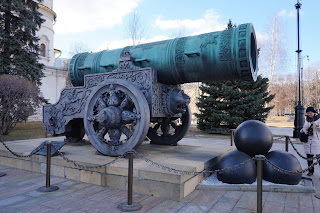 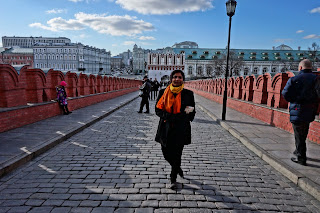 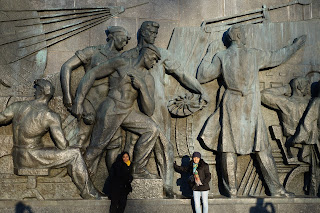 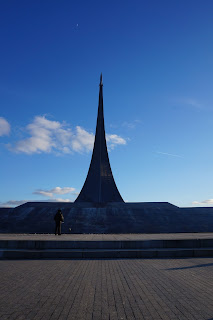 Space Museum , in the pic above, and The All Russian Exhibition Centre, in the pictures below, are right opposite the Cosmos Hotel, where we stayed for 11 days before the Candidates tmt for the Aeroflot Open - but we never noticed either of these !

I can take heart that my bad result at the Aeroflot open might have been due to several reasons, but surely not lack of focus. ;) 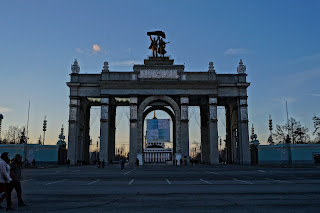 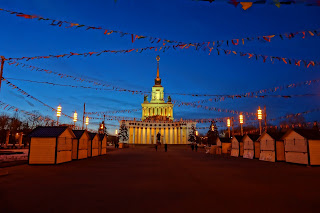 I have always been very fascinated by this city. After all its the mecca of chess. I love going back to Russia again and again, and playing in Russian tournaments. Even 60 year old 2200 veterans can give you an endgame lesson when you have been a decent chess player for 20 years yourself. Their love and respect for chess is reason enough for me to be drawn to this city. I once read a lovely quote which says when we travel we find out how wrong other people are about the places we visit and people we meet ! Its true..I have never really agreed with this general perception of Russians being cold..though the weather in Moscow remained cold as ever everytime ! But this time, that changed too. Thanks to my friends, my meeting with Dvoretsky and my experience at the Candidates, Moscow was warm. Welcoming and warm.